K and I celebrated our first anniversary earlier this week by doing what we do best - eating out. We planned to visit the new San Antonio location of one of our Dallas favorites, Perry's Steakhouse. It has been at least two years since I've been to Perry's and I was pretty excited about enjoying a big juicy steak and all of the yummy sides. Dinner was wonderful, as expected, but the highlight of the night ended up being the surprise scavenger hunt K planned for me.
As we approached our first anniversary, K and I decided to limit our gift giving to traditional anniversary gifts. For the first year, this means paper. For my part, I surprised K by framing the scripture verses read at our wedding with one of our wedding invitations.
I was really curious to see what K would come up with. He's terrible at keeping secrets and was at one time dubbed "the world's worst liar." I mention this not to complain (these are not bad personality traits), but to give a little background on K's secret-keeping abilities. In the weeks leading up to our anniversary, K was silent about our anniversary, gifts, or related plans. Then, as the day drew near, K started grinning whenever I mentioned our anniversary. One night he actually started spontaneously giggling in response to something I said only to explain that it would make sense soon. The suspense of what he had planned was killing me.

When I arrived home on Monday night, I played it cool and feigned disinterest in his gift. Inside I was dying to say "Let's exchange gifts RIGHT NOW!!!" Before I had the chance to say anything, K presented me with a simple white card with a handwritten note . . . It said, among other things that my gift could be found at the end of a scavenger hunt! How fun is that? 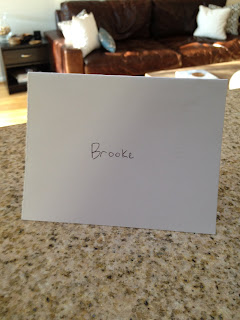 The scavenger hunt took me around our house and was filled with fun personal messages and inside jokes. There was a card in the dishwasher where K does some of his best housework despite the effects of the "forcefield;" a card on our newly hung porch swing (hung 18 months after it was purchased); a card where we keep Lucy's leash (our walks with Lucy double as our time spent solving the world's problems); and cards in a few other locations around the house.
At the end of the paper trail? A garment bag filled with new outfits hanging in the closet! My heart leapt when I saw the Neiman Marcus bag. K went shopping for me in the dress section of my favorite store! I have not had a new dress or top or other fun clothes in ages (and I truly love new clothes), so this was such a treat!
K's gift was thoughtful, creative and fun and made for a very memorable first anniversary. K did a great job keeping the secret and pulled off an amazing anniversary surprise. I can't wait to celebrate 60 or so more anniversaries just as special as this first one!
Posted by B+K at 10:23 PM