Remember the Easter Potluck K and I hosted last month? After we started planning, K gave me a very specific (and low!) budget for the party. That meant no trips to Pottery Barn or Williams-Sonoma for seasonal decorations (or these washed linen table runners I've been eyeing).  And it meant I'd have to get creative if I wanted to dress the tables up.

Once I realized we would be putting everyone outside, I decided burlap would be a great way to spruce of the table without making it feel too formal. So where to find a burlap runner that covers three 8 foot tables? Make it of course! This was a no sew project (because let's be honest, I can't sew!) that was about as simple as can be. 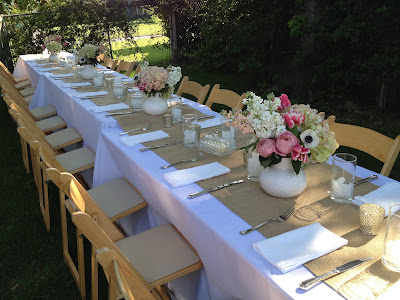 Here's my burlap creation in action.


To make one of your own, you'll need some burlap, stitch witchery, your iron, and a damp kitchen towel (or "press cloth"). Stitch witchery is my new favorite craft supply. What is it? It's sort of like tape for fabric that creates a stitch like seal when heat is applied.  And a miraculous discovery for those of us that are sewing impaired. 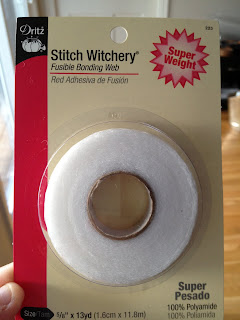 Because burlap is a stiff fabric, I bought the super weight stitch witchery. Worked like a charm.


I was making runners for three 8 foot banquet tables, so I bought a lot of burlap (10 yards to be exact). I think 8 yards would have easily completed the project, but I'm sure I can find some fun uses for the leftover burlap.


To make the runners, simply cut your burlap roughly to size. The straighter you can make your cuts the easier it will be to create your seams later. (I used our wood floors as a guide!) The burlap I bought was double the width I needed, so I cut the length I wanted and then cut it in half down the middle.


Next heat your iron and get your press cloth ready. I got started by ironing a fold in the burlap to mark the seams I planned to create. Next I placed the stitch witchery inside the fold, placed the damp cloth on top and pressed the iron down. Do not slide the iron - just press it in place, pick up and move on to another segment. Once I got going, I found it wasn't necessary to first iron the fold in the burlap, but it was a huge help getting started. I worked in 2-3 foot segments (basically the size of my ironing board). And before long, I was finished. As Ina would say, How easy is that!? 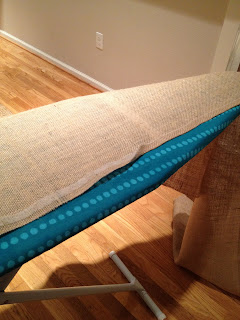 Here's an action shot. Just lay out the stitch witchery, fold and iron. 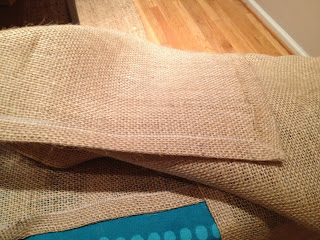 I tapered the corners to avoid bulk and the possibility of a frayed end poking out from underneath. 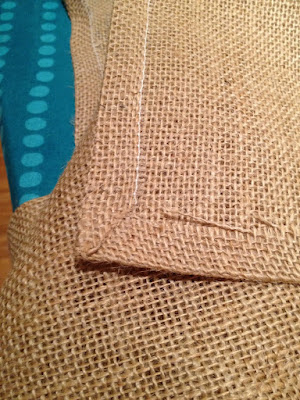 Plus, as K is fond of reminding me, I'm a little OCD. 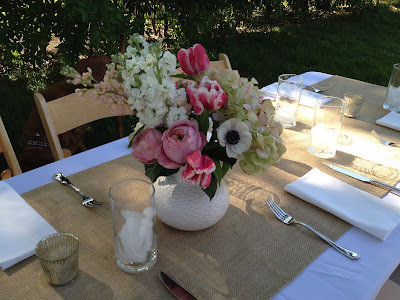 Ta-daaa! Here's a close up of the finished project!


It really is that simple! I think the whole project took me about an hour and a half, but there was some laundry folding and movie watching going on in there too.  There are endless possibilities for customizing this runner. Wouldn't a monogram look cute on either end? Or maybe ribbon detailing along the border? And of course you could always use the same technique with different fabric . . .
Posted by B+K at 7:03 AM